Bringing a new pet into your home can be both intimidating and thrilling. Even if you already have one or two animals at home, caring for them often comes with a lot of questions.

We just want the best for our tiniest and even furriest family members as pet owners. Thus, any pet parent needs to ensure that their pets receive what they need to be happy and safe. Taking care entails more than filling their water bowls, taking for a walk, and scooping the litter box.

While most of the safety tips are usually taken care of, pet owners tend to negate the symptoms of illness. One of the illnesses is seizure!

This is why we’ve compiled a list of dog seizure suggestions. Your dog is most likely having a seizure if she appears confused, falls on her side on the concrete, and begins kicking her legs as if treading water. Seizures and convulsions can affect any dog breed, though certain seizures are more common in some breeds than others.

This guide will teach you all about dog seizures and convulsions, as well as what to do if your dog has one unexpectedly.

What Can Cause Seizures in Dogs?

What Are the Symptoms of Seizures?

Collapsing, stiffening, lack of control, drooling, muscle twitching, chomping, lip chewing, jerking, or foaming at the mouth are some of the signs and symptoms. During the seizure, they can poop or pee, fall to the side, and paddle with their legs.

Some dogs can appear dazed, unsteady, or confused, or stare off into space. Your dog can become disoriented, wobbly, or temporarily blind as a result of the procedure. They walk in circles and collide with objects. They may be drooling profusely on their chin. They will continually attempt to conceal themselves.

Side Effects of Dog Seizures

Before a seizure starts, some dogs start acting oddly and may become agitated or restless. The aura or pre-ictal phase is the time that precedes the seizure and typically lasts a few minutes.

The entire body is involved. When a dog has a grand mal seizure, it can fall over, stiffen up, and shake its entire body violently. Many dogs salivate or foam at the mouth, and some unintentionally urinate and/or defecate. During a seizure, dogs can also vocalize, moaning, and growling.

The least severe type, affects only one part of the body and can appear as nothing more than a twitch in the dog’s facial muscles or limbs.

It lasts just a minute or two. Your dog, for example, may begin chasing its tail or behaving as though it sees things that aren’t there.

[Also Read] What Your Dog’s Tail Tells About Him!

Multiple seizures over 24 hours. Dog will usually have one; seem to recover and then have another a few hours later. He may appears to recover between seizures, although he is quite weary and lethargic, and may even stumble, as seizures are tiring events.

Why Do Dogs Have Seizures?

Seizures can be caused by a variety of things, even though they’re often a sign of a brain problem. Seizures are common during the fluctuation of brain activity. A dog might have a seizure when it’s falling asleep or waking up.

This form of seizure is usually prevented by eliminating the allergen from the dog’s environment. If something new seems to be causing the seizure, make a note of it or consult your veterinarian to find out what’s causing it.

Seizures in dogs can also be caused by viral or bacterial infections. Antiviral or antibiotic drugs are often used to treat these conditions. Idiopathic epilepsy can also cause seizures. Most dogs with this disorder are thought to inherit it, but the exact cause is unknown.

This form of seizure normally occurs when the dog’s brain function shifts from one mode to the next. A brain tumor, whether malignant or benign can also cause convulsive seizures.

When to Call Your Vet

A seizure that lasts longer than five minutes is classified as an emergency. If something happens to your dog, you must take it to the vet right away to avoid brain damage and hyperthermia. Three or more seizures in 24 hours are also an emergency.

Call your veterinarian as soon as possible after the seizure has ended. A CT scan, an MRI, or even a spinal tap can be performed.

What Should You Do if Your Dog Is Having a Seizure?

When you’re dealing with an animal that is having a seizure, there are a few things to keep in mind:

What is causing my dog to tremble or shake? Is it possible that my dog is having a seizure?

Stress, anxiety, cold, discomfort, muscle weakness, neurological disorders, chronic kidney disorder, and Generalized Tremor Syndrome are all possible causes of your dog shaking or trembling (GTS). Although the cause of GTS is unknown, it can be treated with corticosteroids such as prednisone.

A seizure can also be the cause of your dog’s trembling or shaking, it’s best to get your dog tested by a veterinarian if you’re not sure.

What are the symptoms of a seizure in dogs?

A seizure can take several forms, ranging from a distant look or twitching in one part of the face to a dog lying down barking, clenching and unclenching its teeth, urinating, defecating, and paddling all four limbs. Seizures can last anywhere from seconds to hours.

Are all seizures or convulsions in a dog’s epilepsy?

No, a dog may have a seizure that isn’t linked to epilepsy. Even if your dog has only had one seizure, a thorough physical and neurological examination is still needed.

Witnessing a seizure in your pet can be scary. No dog owner wants to see their precious pet having a seizure. Hope this blog has helped you to know more about their cause.

Note:
Call your veterinarian or an emergency veterinarian immediately, even if your dog seems to be behaving normally after a seizure. 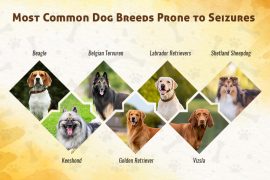 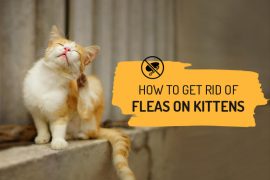 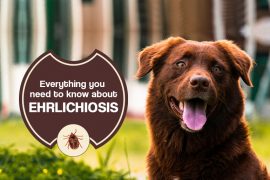 Everything You Need To Know About Ehrlichiosis in Dogs